We’re all aware that the potential applications of Virtual Reality span far beyond the world of gaming. There are potential applications in entertainment, sports, business and even in healthcare. Healthcare is one industry in particular that stands to really benefit from the utilization of VR technology. Imagine being able to get a consultation from any doctor across the globe. To take that thought further, imagine having a doctor in one country perform surgery in another country through the use of Virtual Reality; the possible applications of VR in the healthcare industry are truly limitless and have the potential to be more life changing than any other VR innovations. Healthcare is not one of the flashier industries for VR right now, as a result there are not nearly as many companies nor as much interest compared to those working on VR gaming; but the companies who are working in this space are doing great things and have real potential to alter the healthcare industry.

Immersive Touch is working on creating simulation based surgical training and exploration. They accomplish this through the use of their simulators which immerse the person in a digitally replicated operating environment. The simulators used by Immersive Touch are kind of unique in look and have a lot of components to them including: two handed instrument replicas, surgery specific foot pedals, ultrasound guidance, endoscopic views and more. This looks sophisticated and like it would be really beneficial to use; and a tool like this gives surgeons the opportunity to learn something new without the risk of being in a live operating room. 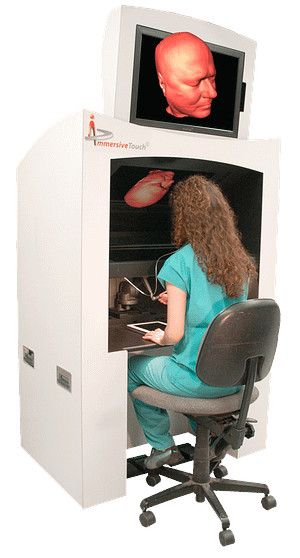 Medical Realities is working on a simulating surgery with their ‘Virtual Surgeon.’ Medical Realities captured a laparoscopic right hemicolectomy on 360 video, which is the first ever 360 video of a surgery. The benefit to this type of video is the level of depth and the perspective it lends. We don’t see animated organs on a computer screen, we’re seeing actual organs in a video where we can look around and gain more perspective than a traditional still video. This type of video will be a tremendous asset for training surgeons in the future so they can be better prepared when they step into an operating room for the first time.

Deepstream VR is an organization whose emphasis is on pain relief. Deepstream VR has a pain relief app called “Cool!” which puts the patient into a beautiful landscape of changing seasons, with several different creatures mixed in. The game does not follow a linear pattern, the patient can stay in the experience forever theoretically. The unique part is that there have been studies shown that show that chronic pain patients who used “Cool!” had pain reductions of 60-70% during the VR treatment and the effect lasted up to 48 hours with no reported dizziness, headache of nausea. What’s important is the last part of that statement, there were no adverse effects of the VR treatment. A lot of people are concerned about headaches, nausea, dizziness or other adverse effect of utilizing VR; and having a study which shows that, when used properly, there are no adverse effects is a giant step forward in the world of VR for all industries, healthcare especially.

Virtually Better is attempting to utilize VR in various therapies and treatments; the most notable of which is exposure therapy. The thought process behind exposure therapy is to gradually expose the patient to a stimulus which causes them anxiety in a controlled environment. The idea is that after enough experiences with the stimulus in a controlled and friendly environment the patient will eventually stop associating that stimulus with anxiety or fear. One such example of this is called Bravemind which is a VR based exposure therapy to treat post-traumatic stress disorder (PTSD). The challenges with treating PTSD lie in the difficulty for the patient to be able to effectively imagine their traumatic experiences because many people are unwilling or unable to do this. Through the use of Virtual Reality patients no longer have to use their imagination, they can instead be shown exactly what the doctors want them to see and help them work through it, while gradually increasing the threshold for just how traumatic the simulation gets. The utilization of VR technology here has the potential to make this type of therapy significantly more effective, which is better for doctors and patient alike.

Firsthand Technology is an organization which represents the synergy which can occur between Healthcare and Gaming when using VR technology. Firsthand Technology is making VR games which promote positive health including things like, behavior change, fitness, good hygiene, managing pain, positive mental health, and more. One example of one of these games is ‘Keep Your Teeth” which is a game geared toward kids that aims to increase cognition through gameplay while simultaneously encouraging kids to brush their teeth. Using gaming as a medium to promote a positive message is not a novel concept, but Firsthand Technology brining these games into VR are a good sign of things to come. Healthcare organizations need to know how to engage their audiences if they want to spread a positive message; VR gaming is big right now and it’s natural to assume if you can find a way to merge your message with VR gaming you will find success.

Osso VR is working on an impressive VR surgical simulation which allows the user to actually use their hands. The website claims that they can simulate anything and features quite an impressive demo which can be seen below. If Osso VR can truly simulate anything it will have a major impact on how medical schools train surgeons. The dangers of students performing live surgeries can be significantly mitigated if we can move that training to VR. Using VR for training has the potential to reduce costs in various places across the healthcare industry, which would potentially provide more resources and opportunities for research on major diseases. Needless to say Osso VR is the first step in the right direction when it comes to using VR for healthcare training.

One Caring Team is an organization whose goal is to supplement healthcare needs for family caregivers of elderly patients. Their main service is to have people call these patients 1-3 times per week and establish an emotional connection with them; the reps that do this will also talk to the other family members and give them updates on how their loved one is doing. One Caring Team is also exploring VR treatments. The app which One Caring Team uses is designed to transport a patient into a new world which is aimed at combating depression and can also be used to help with pain management. It’s good to see that a lot of healthcare professionals are starting to realize the potential that VR has in healthcare; with more attention comes more refinement, and more assurance that using VR for medical purposes does not have any adverse health effects.

Bioflight VR is making platforms for all the major VR headsets including: PlayStation VR, Samsung Gear VR, and Oculus Rift to name a few. Their platform is intended for medical training in Virtual Reality and has a myriad of uses. Bioflight VR builds platforms for each customer depending on their needs, and the possibilities appear to be limitless. One thing which they tout is the ability to render MRI and CT data in an interactive and virtualized environment, which is a very big claim and a very cool thing to be able to do. This platform will be invaluable for medical students, and the potential for doctors to be able to view MRI and CT data in Virtual Reality has potential to change diagnostic procedures across the industry.

Applied VR has created an app designed to help patients with chronic pain or patients who have anxiety about a procedure. The way their app is designed is for a patient to wear a Samsung Gear VR headset and be transported to an immersive and calming world; patients can also opt to play a game while wearing the VR headsets. It’s interesting to see VR being used in this way for patients, usually it’s more geared toward a treatment, but overcoming anxiety about a procedure, either before or after, is a novel application; and it’s one that can be potentially useful for children who have to undergo various procedures.

Virtual Reality technology has a potential application for just about anything you can think of, and some things we would rather not think about. How medical students are trained is something that most of us probably never think about, and yet it’s an important part of the healthcare system. VR technology offers a refreshing way to improve the way we train surgeons, as well as offering useful tools to existing therapies and other medical practices. As technology moves into the 21st century it is important that the healthcare industry keeps up; the technology is too impressive and has too many potential applications to be ignored.