Maybe I’m old school, but I’ve always been suspect of watching internet video on my phone.

Doesn’t mean I don’t do it, but there’s always a latent uneasiness, like I’m selling myself short but there’s no other option. I still laugh at the dancing dog youtube video a friend texted, still well-up at the facebook videos of my baby nephew crawling, and can’t resist previewing the next episode of Orange is the New Black while I’m walking home – but the one constant through all this mobile media ethos is that, well, I’m squinting.

Google just solved my problem – at least at home. Introducing Chromecast – a brilliantly functional, flashdrive-sized dongle designed to act as a portal from your computer or mobile device to your tv. 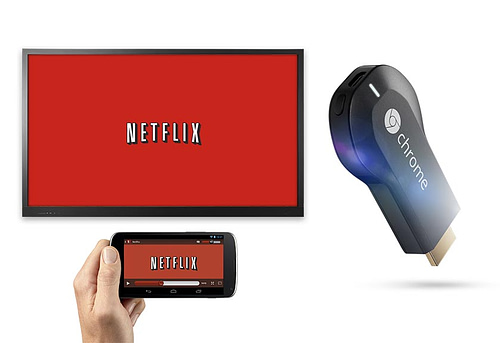 Since it streams Netflix, is compact, and connects to your tv, all immediate logic would assume Chromecast is designed to compete with the AppleTV or Roku television setup devices. Which it does, but the spirit and capability of Chromecast is a little different – while it sync’s up easily with certain media streaming apps like Netflix and Youtube, the idea is more that it pretty much transforms your mobile device into a tv remote, displaying anything you’d normally watch on your smartphone, tablet or pc onto the 40 inch flatscreen in your living room. The Chrome browser already has a Chromecast functionality that will “Cast” immediately any tab you’re viewing.

Not sure if you heard me: IT COSTS THIRTY FIVE DOLLARS. The only thing more enticing than its simplicity is the price. So no more squinting, at least once you get home. And while not many apps are supported yet, imagine the potential even beyond simple video. Checking your newsfeed, sending a tweet or, come on, at 40 inches tall, even a 7-second snapchat will bare a whole different nuance.

So to recap – affordable, simple (plug the Chromecast dongle into the HDMI slot and your phone is on your tv) and, of course, new. Any drawbacks? The current iteration has some lag issues and crashes from time to time. It does work with a mobile hotspot but a WiFi connection makes for much smoother mobile-to-tv connectivity. And while certain apps already have Chromecast compatibility like Netflix and Youtube, most still do not, so HBOGO and Hulu Plus depend on the browser and will have issues.

But overall, hey, it’s 35 bucks. And it’s Google. It’ll only get better when glitches are ironed out and more app developers begin to support it. But until then, it’s a new device to play with. And this one is really cool. Well played, Google.
Will you be “Casting” video with Chromecast? Let us know in the comments section below.

Other cool stuff you can already do with Chromecast: