Kids are always interested in the latest and greatest thing, that’s why they are often the early adopters of new technology. Virtual Reality and Augmented Reality have seen a lot of development recently, and several companies are wisely looking into ways to utilize this technology in a way that’s appealing to kids. What a lot of companies are trying to do is get this perfect marriage between traditional toys and technology; and what they’re finding is that AR is the best way to combine those two worlds. The following are some of the companies making waves with their AR innovations which are being aimed at kids.

SwapBots
SwapBots is an organization whose aim is to combine traditional play with technology. Kids are some of the largest consumers of technology and companies making toys for kids are cognizant of this fact. An example of a union between a traditional toy and AR technology is in SwapBots, which are toys that kids can collect, customize, and battle by using their smartphones. The other major advantage of this product is it seems like something that won’t break the bank for parents, which is always an important thing to keep in mind when targeting kids.

Curiscope
Curiscope is a startup company focusing on education in AR, and their Virtual Tee is already turning heads. The way it works is that one person wears a t-shirt while another person with a smartphone launches the app and is able to learn about the human body in a unique way. This is a unique way to utilize AR in education and it is surely a sign of good things to come from Curiscope. 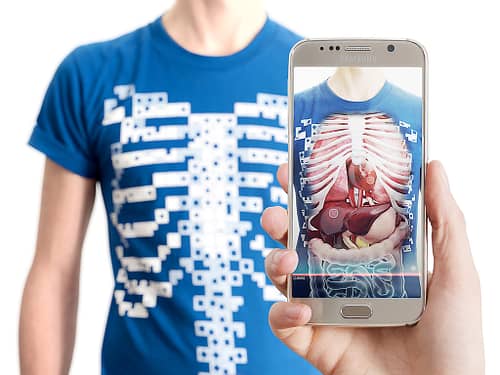 GEO AR Games
Everyone has heard of Pokémon Go by now, and if you like Pokémon Go then you will definitely be interested in some of the games by GEO AR Games. GEO AR Games is working on games which are similar to Pokémon Go in the sense that in order to pay them kids will need to go outside with a smartphone or tablet and move around. This game is likely to be viewed favorably by parents for the same reasons as Pokémon Go, anyone with a smartphone or tablet can use it, and it encourages kids to go outside and play. Here is an example of one of their games titled “Sharks in the Park”

Zappar
Remember the days of QR codes, those weird looking barcodes which could be scanned with your phone to bring you to some promotion? Well Zappar is introducing the next generation of QR codes, or as they call them, Zapcodes. The unique thing about Zappar and Zapcodes is that scanning these codes doesn’t just bring you to a website, but brings AR to your phone in a way that enhances the product which has the code; as can be seen in the video below. Additionally Zappar also allows people to create their own AR content through their app called ZapWorks. Navigating and utilizing ZapWorks seems fairly straightforward, which is important if we expect to see any kind of large scale adoption. This app has the potential to engage kids in the world around them, as well as acting as a catalyst to get them to consume more traditional media.

Osmo
If you have kids who are constantly playing on your iPad then you are going to love Osmo. Osmo is a projector which gets mounted at the top of an iPad and placed in a base so its standing upright and can see what is in front of it. There are several different things you can do once you have Osmo set up including, games that involve shapes, basic coding, words, numbers, drawing and more. One such example of these games is called Newton, which is a game where kids balls are falling from the top of the screen and have to be directed into targets. The way that this is accomplished is by drawing various shapes to direct the balls into the targets, as can be seen below. Kids love using technology and Osmo is a creative way to engage kids in more educational play while combining technology and more traditional types of play.

Popar
Popar is a company which is combining AR technology with books and charts for kids for a whole new experience with reading and learning. The way the app works is that when you order one of their products and then once it arrives you download the app that comes with it; while reading through the book or chart you will have the opportunity to use the app to make the content come alive, like with some of the charts that can be seen below. Keeping kids involved and interested in learning is crucial, and if utilizing AR technology is the way to do that, than more companies should be following suit to give kids the educational experience that they want.

Anki
If you’re looking for the next best toy which every kid is going to have to have, then you don’t need to look further than the cars which are being produced by Anki. Picture the RC cars which we all grew up playing with and add in the kind of racing you expect to see in video games and that will give you a picture of the Anki cars. These are cars which are controlled by smartphones and have additional things that the drivers can use like boosts and weapons, it’s almost like playing Mario Kart with tiny smartphone controlled cars. Like all good products targeted at kids these cars, and the track, will not break the bank; the starter kit comes in at $149.99 and includes the track, 2 cars, and 3 accessories. The cars themselves charge in 8-10 mins and are compatible with most smartphones. Technology is evolving and more and more we are seeing that the next generation of toys are evolving with it; and the more it evolves the more impressive it becomes and the more you wish you were a kids again.

FLARB
FLARB is a company with a lot of experience in the VR and AR industries, they have been working on VR content for the Gear VR and AR content with the HoloLens. One such example of the content they are working on is a game of theirs called Ether Wars, which allows players to create a space battle right before their eyes. This game is still in development at the moment but it’s nice to see that progress is being made in the AR space and that developers are working with the HoloLens. Kids are usually the first ones to try out a new technology and developing AR games and experiences which appeal to kids is a sure-fire way to keep people interested in AR technology.

Interactive AR
The days of all kids wanting to read printed books are behind us. Most kids read on their computers, smartphones, or tablets; only reading printed materials when they absolutely have to. Interactive AR is trying to change that by making kids’ books and puzzles which have an AR component. The way that it works is that kids build a puzzle for instance, and then use their smartphone or tablet to have the puzzle come alive. They’ll see different aspects of the puzzle pop up and they will be able to interact with various parts of the experience. Engaging kids in educational content is harder than ever, and asking them to read a standard printed book will be a tough sell; but asking them to build a puzzle or read an AR book and just enjoy themselves is much more plausible and enjoyable for everyone involved.

Blippar
Blippar is a unique app in that it’s like an AR version of StumbleUpon which lets you discover new things based on things you like and what’s around you. The way Blippar works is that you launch the app and point it at things around you and it takes pictures and makes them into icons you can click. Clicking on those icons brings up a web of sorts that allows you to click on related things or can show you videos or AR experiences based on those things. For instance if you took a picture of a pizza it would bring up things related to pizza like Italian food, and it would also bring up something you could click on that would show you pizza places near you; which is why it uses your location. This style of actively exploring the world around you using your smartphone and AR technology is interesting; and is something that is likely to appeal to kids.

Quiver Vision
Quiver Vision is a company which is bringing some much needed change to coloring books in a way that is going to cause disbelief among kids everywhere. Quiver is providing pages for kids to color in on their website, and once the kids finish coloring they take out their smartphone or tablet and watch their creations come to life. In addition to seeing the experiences exactly as the kids colored them, you also have the ability to interact with them for added enjoyment. Technology is prompting kids to leave traditional toys and methods of entertainment in the dust, if the more traditional mediums don’t keep up with technology then they’ll find themselves abandoned by kids everywhere.

Crayola Color Alive
Crayola is well known as everyone’s favorite crayon company; but much like Quiver they are working on brining the much loved activity of coloring into the 21st century. The chief different here is that the Crayola Color Alive pages bring the characters into AR in a way where you can pose for pictures with them, much less of an entire environment type of thing which Quiver has. Additionally the pages offered feature much more well-known characters like: The Avengers, Frozen, Skylanders, Monster High, and more. Brand recognition is an important and it will aid in adoption of this new form of technology utilizing AR; kids will be more interested to try this out with one of their favorite characters form Frozen.

Whether you’re a company making coloring books or remote control cars, AR technology is too big to ignore. Kids are starting to adopt this technology and it’s clear to see that it’s the way of the future; ignoring this trend would be an ill-advised move by any company making toys for kids. Technology is evolving and if you refuse to evolve with it then you’re going to lose to your competition who is growing with technology. More companies would be wise to follow suit with the companies listed here and start riding the AR wave before its too late and they get caught in the dust with their outdated products.

Ready to take your insights to the next level? We would love to help with your next market research campaign! Contact Us Today