Good news, right? It’s so nice not having to check weatherbug to see if we need to don a coat or umbrella for our morning commute. Depending on how status-savvy our friends are, we usually have at least one or two in our news feed describing how high the pollen count is or if it’s going to snow. And it makes sense in the evolution of social networking. Weather is, after-all, what we all have most in common.

But equally as dependable is the likelihood that social network status updates will tout in-depth reviews of what we have second-most in common – TV.

We at the Tech-Savvy Researcher have touched previously upon the “second screen” (using a tablet or smart phone to network while watching tv to make it a more social experience), which is itself trending toward types of television programming that tend to be more socially engaging. And at the top of the list: Sports and Reality TV.

The trend lends itself to our ever-evolving habit: what we do in life, we want to do online. As long as the show airs, we will discuss the last-eliminated American Idol contestant at the water cooler. We will forever watch football at the local watering hole over pitchers of watered down swill and soggy wings, because we want to share our excitement or joy or life-altering disappointment over how our teams fair on any given Sunday with others. But there are just so many “others” online, that we can ever-extend the reach of our emotional remuneration by simply logging on.

And many do. According to a year-end review from Trendrr, sports topped out at 31% of the programming responsible for social networking buzz. Also significant was Reality TV at 17%. What these types of programming have in common are the elements of human wanting that drive us to online networks in the first place: triumph and failure, risk and reward, strategy and implementation, violence and sexuality and other prurient indulgences, arguments and disappointments and mistakes and big moments. You know, life. 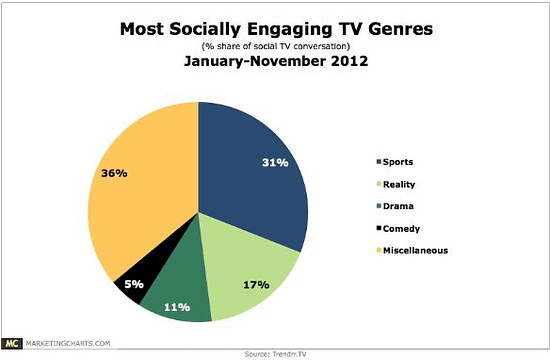 For 2012, NBC topped all other networks for social TV buzz with their airing of the London Summer Olympics (@USASwimFan: “OMG Michael Phelps LOST!?”). The X Factor and The Voice got top social billing along with Spongebob Squarepants for TV shows. And the most socially engaging telecasts were the Super Bowl in February and the MTV Video Music Awards in September, making 2012 the year of the tweeted sports score and reality-related facebook status.

I’ll wrap up this feature with a challenge: If you’re at a bar or restaurant or any social gathering for the first NFL playoff game this Saturday, look around after the first big play, score or turnover. If the tablets or smartphones weren’t out already, I’ll bet dollars to potato skins they will be.

Do the best plays drive you to update your status? Sound off in the comments section below.